Why do we need myth?

Myth connects us to our land and to each other. Myth connects us through time and space. From our homelands to our newlands. From ancestor time to the present, shining a light on how we may continue in the future.

Everywhere, the connection of original peoples to their land has been fractured or lost, and with that, myths and rituals disappear. Through this process of modernization we lose a body of wisdom accumulated over millennia that served as a blueprint of how to protect and sustain humanity.

My journey took me back to my homeland, Jeju island. The island itself is believed to be the physical body of Sulmundae, the creator goddess of Korean mythology. Jeju is the heart of Mugyo (Korean shamanism) – there are over 13,000 gods and goddess on the island. Jeju has so much pain and beauty through myth and history.

Nowadays, they say Jeju has three abundances: wind, stone, and women – Jeju samdado (“three many”). Women free divers fill the markets with fresh seafood. their Yeodo (song) and their soombisori sound (the whistling noise that they release when they come up for air) against a backdrop of the harsh ocean waves. Memories of my grandmother feeding me fresh abalone and the thick silence felt in my grandparents’ traditional jogajip home – silent memories of past tragedies. Sasam, the Jeju massacre, April 3rd, 1948. Families, neighbors, and villages divided. Visiting these massacre sites, including Halla Mountain, I constantly found myself in the company of a murder of crows. It seemed to me that they were witnesses and protectors of the land and lost souls. Watching me, piercing me with their gaze and asking, “what did you see?” “what did you hear?” My eyes traveled back to the ocean, where the construction of a US Naval base is once again destroying the land and people. Drills cut into ancient volcanic stone and families, neighbors and villages divided again. Sixty years. It still continues.

We urgently need myths and rituals to regain what we have lost in this destruction. How can we remember the songs of our ancestors, the words that they spoke, their care of land, people and spirits? I believe that art has the power to creatively confront our struggles – to regain our strength and to take action. That is why my creative journey is centered in ritual. I dedicate my performance as a ritual to not only discover my own history and myth, but also invite others to discover their own. Myths are not just tales from long ago – they are launching points for taking stories into you and transforming those stories into new personal myth. Though this process, I believe we can be empowered in our lives like mythical deities. 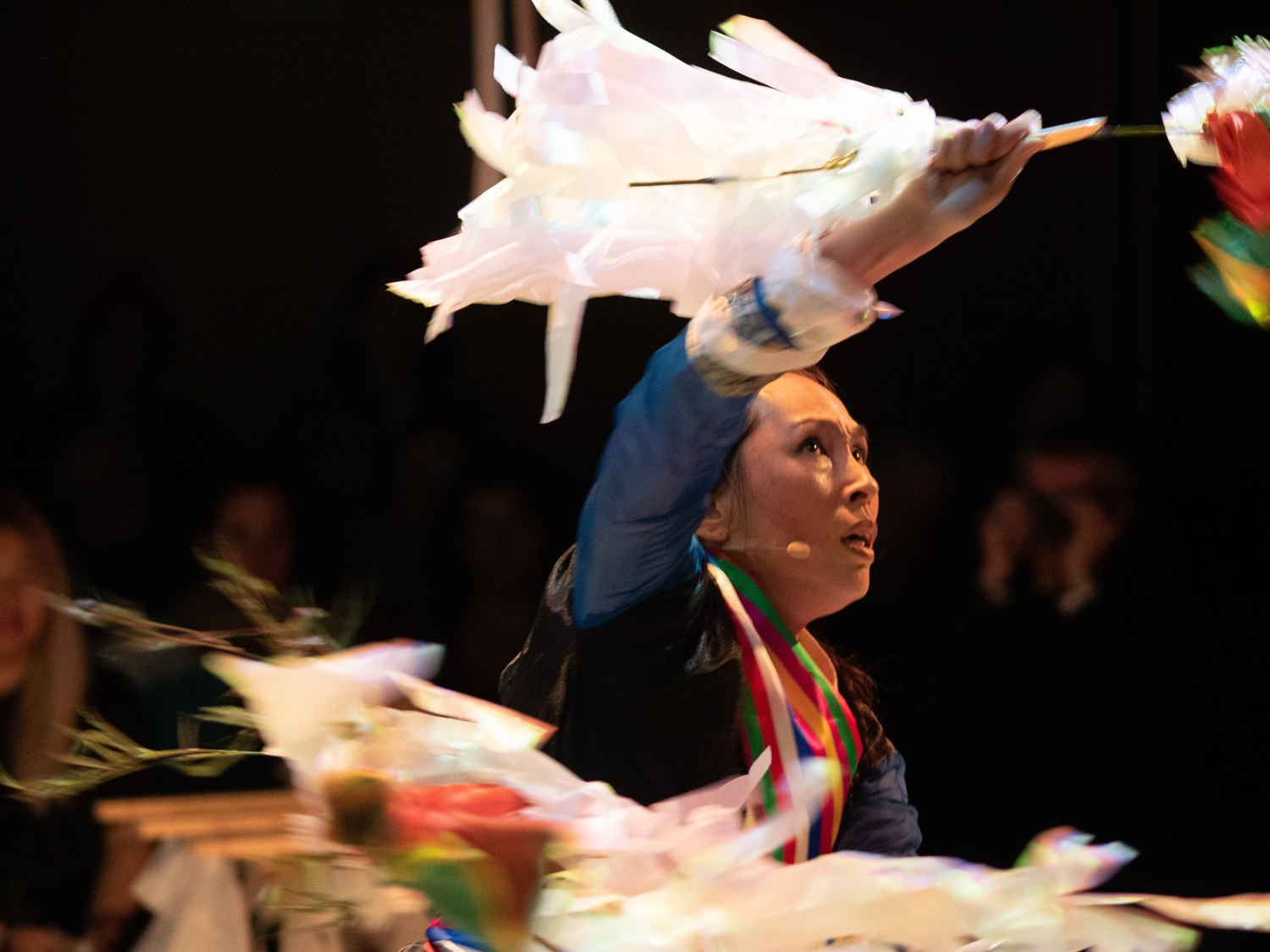 Instead of continuing a career as a touring traditional artist in Korea, I immigrated to Oakland, CA in 2002 to follow my life path – creating a new ritual performance form, combining my training in ancient shamanic ritual practices with post-modern performance styles and electronics.

For the past 9 years, I have worked closely with Anna Halprin. I have danced in her productions and I am now on teaching staff at Tamalpa Institute. She has become an important teacher and mentor to me.

I founded Dohee Lee Puri Arts in 2014 as a producing organization for my community projects here in the Bay Area and for touring my multimedia performance pieces and teaching workshops. The mission of Puri Arts is to practice and perform art to commune and heal with people and spirits. The organization utilizes ritual to heal fractured relationships in the urban environment between humans and the land and between individuals and their communities. Our original performance works emphasize the mythical, experimental, ritualistic, historical and healing aspects of performance and installation, catalyzing new relationships between identity, nature, spirituality, and the political.

My current project, MU/巫, pilots a shamanic model of utilizing traditional arts and culture for engaging immigrant and refugee groups. I am collaborating with local immigrant and refugee community groups to tell their migration journey stories. Together, we are creating new myths to carry our cultures, identity, and languages and reflect our stories in the USA.

We are developing performance-based community rituals in an extended process of collective healing. This is a community engagement strategy to lift up and support the leadership, visibility and voices of diverse immigrant and refugee communities. Through reclaiming our own myths, we also honor indigenous land, people and their myths. 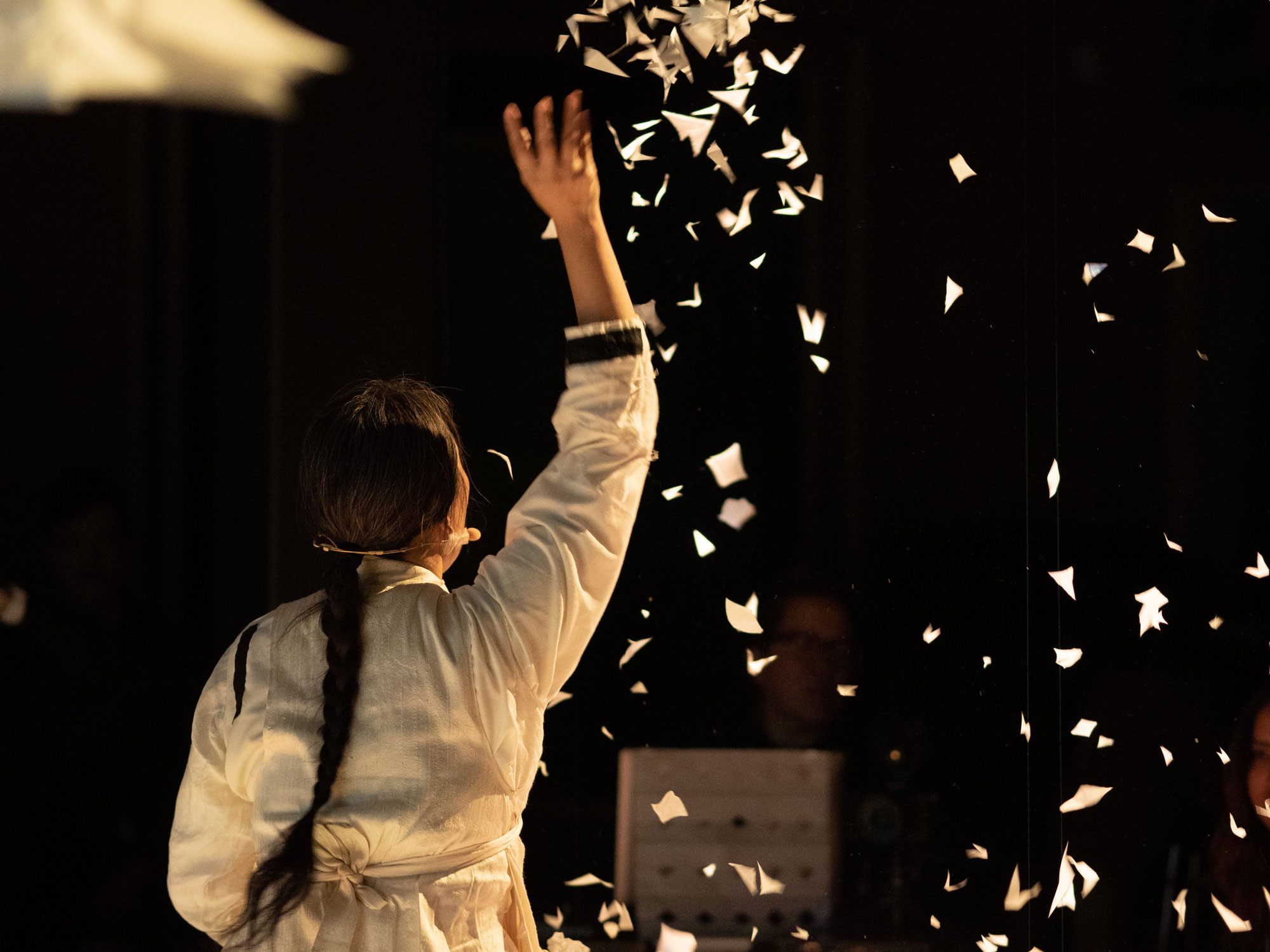